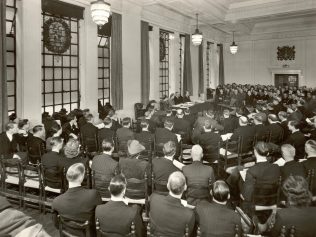 zoom
A Central Council meeting in 1948 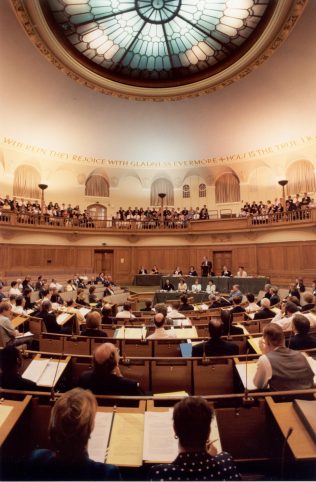 zoom
Then Chairman Stuart Hampson addressing the Central Council in 1998 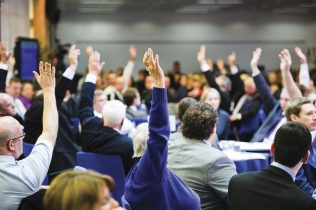 Creation of the Staff Council

After Spedan Lewis took over managerial control of Peter Jones in 1914, it did not take him long to set into motion his ideas of democracy. In 1915, he set up a system of staff committees, the forerunners of today’s Partner Voice, then known as the Committees for Communication. These committees were formed only of non-management Partners who met directly with Spedan Lewis to discuss matters which affected their day to day environment, no managers were present.  As they had previously had no experience of being asked their opinion on how the business should be run, to offer any suggestions or criticise decisions or working practices these committees began by studying local issues such as the strength of the tea and the staleness of the bread offered in the Partners’ Dining Room.    However, it soon became clear that there was a need to include representation for the growing number of managers within Peter Jones so, in 1919, a Staff Council met for the very first time. Explaining his actions in the Gazette of the 20th September 1919 Spedan stated

It is quite true that good government is not a proper substitute for self-government and, therefore, the Staff ought to be made self-governing as fast, and as completely, as the actual facts of existing trade-conditions allow.

The Staff played an important role in the Partnership during the years 1919 to 1940, but unprecedented growth in the Partnership meant that the Staff Council was no longer correctly applicable or appropriate to the present conditions. Instead, Spedan Lewis pronounced that ‘a ‘Council of the House’ be set up in each new branch of which the staff is not importantly smaller than that of Peter Jones when the Council was started there’.

The Central Council is created

This new structure necessitated the creation of a Central Council, a Council of the Partnership that could preside over matters that exceeded the jurisdiction of the local House Councils. Thus the Central Council was born.

Partners elected to the board

In 1946, the Council took the important step when it was asked to choose five Partners to serve as directors on the Central Board. This was seen as an important safeguard of Partner’s interests by the Founder, for it offered the Partners and the Partnership, the security that the Board themselves could not put anyone’s livelihood at risk through their decisions. According to Spedan, his role as Chairman was also changing. Using a cricket analogy, he stated to Council

In 1957, in a further watershed move, the direct election of Central Councillors by Partners themselves replaced the previous system, in which Branch Councillors had elected candidates from their own number. The ultimate in democracy had now been achieved.

In more recent times, the Central Council has been replaced by an overiding Partnership Council. Other big alterations to the democratic process include the introduction of the PartnerVoice, and Branch Forums, and a John Lewis and Waitrose Council.