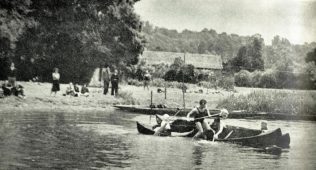 zoom
A team from Tyrrell and Green Southampton triumph in a Mop Fighting bout, at the 1939 Odney Rag Regatta 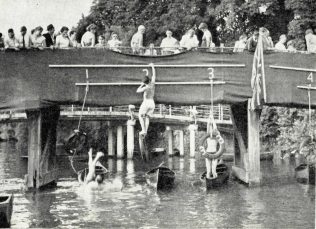 zoom
The Leander Race underway at the 1955 Regatta

The Partnership’s considerable and existing emphasis on sports and leisure pursuits is a notion ageing back to the very beginning of the Partnership. The belief was that sport and other activities were an excellent way of furthering the individual. One such activity that can be dated back to the Partnership’s infancy is the regatta. The first regatta was held in 1928, the year after John Spedan Lewis’s purchase of the Odney Club. The event quickly turned into an annual highlight, featuring a unique mixture of both racing, swimming competitions and a fair few unique challenges.

Some of the most original challenges included one called the Leander Race. The basis of the Leander Race was that a ‘lady is bound to the rail on the top of the bridge. The gentleman paddles down in the canoe to the bridge, climbs up and unties the lady’. All very bizarre! Another different event that took place during the Regatta was the Mop Fighting event. Here, two canoes would go head to head against each other. All occupants of the boat would be equipped with a mop, with the sole intention of sending the boat and opposition overboard.

From these early years, the Odney Regatta continued to grow in popularity. By 1965, the attendance was up to 3000 people. With this number all but certain to keep on rising, an alternative venue was sought. The 1978 Regatta marked the 50th anniversary of the event. Sadly for most however, it was also the last time that Odney would host the event. In 1979, the event was moved the larger venue of Knebworth.

Do you remember the rag regatta’s? We would love to hear your memeories!