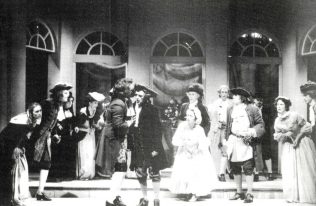 zoom
A scene from the 1985 Dramatic Society classic, The Good Wife 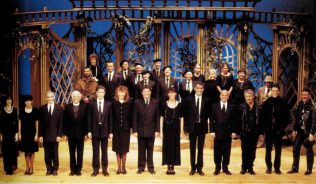 zoom
On stage: the cast of A Much Todo About Nothing, 1994

To this very day, the John Lewis Partnership continues to put on both varied and exciting dramatic performances that thrill the actors and audience alike. The Dramatic society has a illustrious long history.

In 1929, The Lewis Partnership Dramatic Society as it was then known put on its very first performance, with a series of one-act plays. One critic noted of this string of performances:

Intellectual honesty prevents us from saying that we, personally, considered the pieces presented super-excellent in themselves. They were trivial, and we expect the LPDS will next time choose some sterner stuff

One particular highlight of the evening was the Partnership Song, whose last verse when something like:

Harries bought Lewis (Louise) an Austin 7.
They’re Spedan away on the road to Evan(s),
With Peter and Joan
From the square called Sloane,
Just a cheerio family

The evolution of the Dramatic Society

Did you remember a Dramatic’s Society performance? Or, did you act in play? If so, we would love to hear all about it!