Memories of the 'old shop' 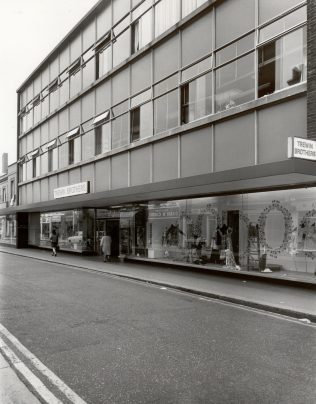 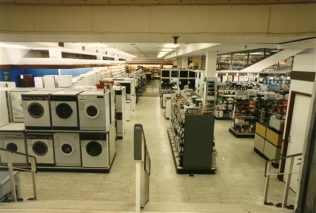 I moved to Watford from a bed-sit in Chiswick in 1958.  After Chiswick, Watford seemed almost Victorian, certainly very quiet.

In those days, food mixers, vacuum cleaners (Dyson came later) were sold along with cookers, washing machines, spin dryers etc.  However, the stock level in general seemed small.  Fortunately the selection became much larger in the following years.

We used to have great fun
Several of the washing machines were plumbed in so we had to remember to turn off the water before we left the department each night.  Once we used these washing machines to wash the Trewin Brothers football team shirts.  (I forget the colours.) Anyhow, someone who shall be nameless, washed the shirts on too high a temperature!  Needless to say, we didn’t get the shirts to wash again.

I also remember the first microwave ovens arriving in the department, we used to have great fun demonstrating them; putting a glass of water inside, switching on and seeing the water heat up.  Mind you, we had to switch them off quickly to avoid breaking the glass. These inventions are taken for granted now, but at the time they seemed quite incredible.

Selling staff were supplied with bill pads and on the completion of a sale would write out the details and hand the bill to the cashier. (Usually sales people sold, and cashiers took the payment.)

A deck chair on the flat roof
I recall the climb at break times, up the stairs to the top floor Partners dining room (from the basement, remember.)  Yes, I know there was a lift in the China and Glass department; but for some reason I usually climbed the stairs.

After tea or coffee, if it was a fine day, I had five minutes or so in a deck chair on the flat roof.  Not a roof garden but a place to have a chat with other partners in the fresh air.

Help was always at hand
Besides selling we had other duties of course.

The hassle of stock taking and auditing the endless sheets of goods.  Hardware, checking tins and tins of paint in the dungeons (the low underground passages where stock was kept.)  I had to duck being over six feet tall.  The smell of sewers and trying to avoid the rat bait.

However help was always at hand, Marion Hudson dealt with any of our queries.  I worked once or twice on a Sunday stock taking in Radio and Television.  Denis Rastrick was their manager.  The shop opened from Tuesday to Saturday as a five day week.

We sang Carols
Then there were the Christmas dinners, which still continue, I am glad to say. Partners were allowed to bring along a bottle of wine to share with others.  The managers always dressing up for the occasion and serving partners with the festive food.  Sometimes we sang Carols before going back to the shop floor.

On Christmas Eve, I used to bring a bottle or two of home made blackberry wine. The berries hand picked from my allotment. The wine was sometimes stronger than usual but nobody seemed to mind.  It washed down the sausage rolls nicely.
Happy days.  Happy Christmas!

‘Stan, pick up tha’ musket’
During the few weeks before Christmas many departments had a party at various locations.  The Noke Hotel or the Waterend Barn in St Albans were popular.

At one pub in Garston, I brought along to the party my old wind-up gramophone and a few old records; (78 rpm of course – black label, Columbia,) of Stanley Holloway; ‘Stan, pick up tha’ musket’, ‘The Lion and Albert’,and a pop classic ‘Busy Line’.

During the year we had Product Training evenings; held either at the shop or sometimes at the Watford Hilton.

During my lunch hour, after a quick sandwich, I would go off checking on the competition.  There were more electrical shops or electrical departments in Watford then and competing for sales kept the undersale ladies, and myself, quite busy.

I had a go at compiling a D-Day quiz which took a lot of researching also a quiz on food.  One of the questions was how to make a Caesar salad?  One of our literary partners knew the answer and he won the prize, a small hamper.  I think he deserved it.

I retired from Trewins in 1990 but continued to send contributions to the Chronicle in the new shop, now John Lewis Watford, at the Harlequin Centre for some time.  Although I am now a retired partner, I still feel part of the family.