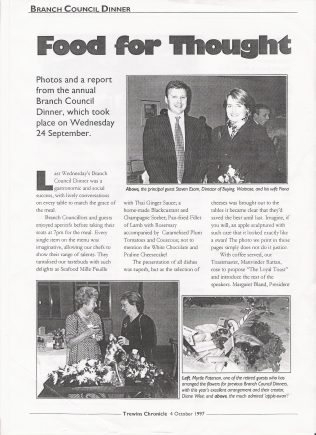 John Spedan Lewis first conceived the ideas of Branch Councils in 1926.  By 1929 these Councils were spreading around the branches.  The Democracy of the Partnership was born.  Councils operated in a similar way to local government.  Councillors elected by their department would debate local issues.  The meetings were chaired by one Councillor voted as President for that financial year.  Ex Officios would include Managing Director, Registrar and Accountant providing expert knowledge when required.

Local issues could be aired
Councillors were subjected to rules covering their length of speeches rather like government.  Votes would be carried out in a similar way to Parliament.  Local issues could be aired and voted upon.  Newly elected Branch Councillors would be trained to speak at meetings and would be guided into debating issues with confidence.  These Councils operated in every branch until recently.

Local charity appeals
Sub Committees authorised by Branch Councils included Claims Committees (responsible for Parners’ welfare.)  Most branches dealt with Charity requests from within their Claims Committee.  Trewin Brothers was one of the first branches in the 1970’s to separate Charity requests into a Charity Committee.  All local charity appeals were considered by the Committee and its wishes carried out in the form of gifts, cash or vouchers.

The Branch Council Clerk’s job was to co-ordinate all material for use at the meetings.  The Clerk was responsible for training new Councillors, supplying them with their relevant paperwork and generally encouraging them to communicate at the meetings and to their constituents afterwards.  The Clerk also acted as Secretary to the other Committees.

The article Food for Thought is from the Trewins Chronicle 4 October 1997 when the guest speaker was the then Director of Buying Waitrose, Steven Esom.  I was Branch Councillor for Special Sales from 1991 until 2004.  I really enjoyed being a part of the democratic process and of course the invitation to Branch Council Dinner.

Our Catering Partners always pulled out all the stops to produce a fantastic spread.  The Partners dining room was transformed by our Display team and Myrtle Patterson, China and Glass department, provided wonderful flower arrangements for the room and the tables.  As Myrtle was to be a guest that year, she was retiring; Jean Gilchrist asked me if I would do the flowers and the photogragh shows Mrytle very kindly admiring my handiwork.  I then did the flowers for subsequent Branch Dinners for many years including my most memorable occasion when the Chairman Sir Stuart Hampson was our guest.