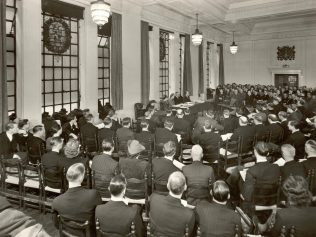 When Trewins became part of the Partnership in 1940 it joined an organisation which was proud of it’s democratic structure.  All partners, including the new staff who joined when the SPS stores became part of the John Lewis Partnership, were entitled to run their own branch council where they could discuss the way their branch was run.  Partners from each department were encouraged to vote for a representative who would sit on the council and express the ideas of their constituents.  There were also members of management on the Council, in an ex-officio capacity, and all managers were accountable to the Branch Council for any decisions they made about the future of the branch.

Central Council
There are few pictures of the Trewins Branch Council but this image shows the Central Council.  This was the body to which every branch sent elected councillors and where matters relating to the whole of the Company were discussed.