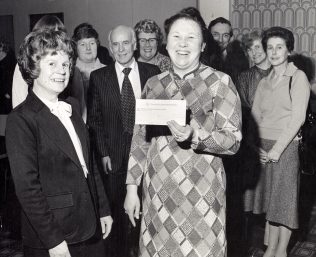 zoom
Presentation of cheque 1980.
From the private collection of J. Glenister. 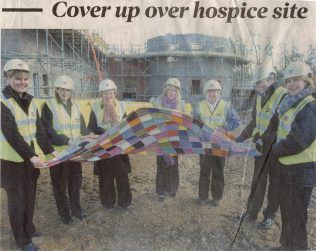 The committee was by invitation
Hans Peters who was President of the Trewins Branch Council and John Lewis Watford Branch Council for many years tell us that the first Ad Hoc Charities committee at Trewins was established by David Carter when he was President.  David had a kidney transplant and created Sid the Kid as a fund raiser for the Renal Unit at the Royal Free Hospital Hampstead.  The committee was set up to co-ordinate the fund raising.  Until then any charitable giving was a full Council proposal – rather long winded!  The committee was by invitation from the President and it continued that way for some time before it formally became a proper Council committee.

Change in the Democracy
Hans took part in the Partnership Ad Hoc Committee which set up the Charities Committee across the Partnership in the form which was with us for many years.  Last year, 2007, saw a change in the Democracy from Branch Council to Branch Forum and we no longer have a Secretary to the Charities Committee but a Community Liaison Co-ordinator; who is much more pro-active in how the Branch gives not only money but time and practical help to local Charities.

Not just about giving a cuddly toy
The Branch along with the rest of the Department Stores and Waitrose have 500 Community Hours and everyone is encouraged to give their time, either individually or as a group, to help in a practical way.  We have a long list of projects we have undertaken.  These include painting and gardening so it is not just about giving a cuddly toy or a television for a raffle prize.

John Lewis Watford Charity of the year 2006 was the Hospice of St Francis who at the time were building a new Hospice in Berkhamsted.  We raised around £7,000.  The picture shows Charity Committee members visiting the building site and donating a blanket.  It was so cold we wanted to huddle under it.