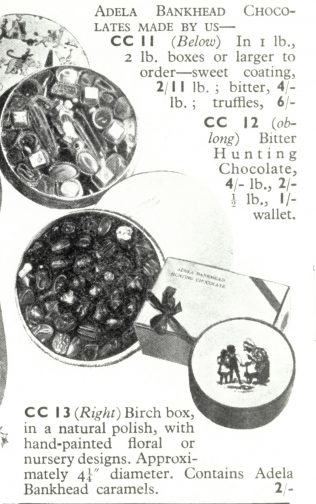 One of the Partnership’s smaller ventures into the manufacture of its own merchandise began in 1931, when it acquired control of the Adela Bankhead hand-made chocolate business. This was a very small firm established by two sisters who produced high quality hand-made chocolates and sweets. At first the factory was behind the scenes in the John Lewis East Island building ( on the far side of Holles Street) and the chocolates themselves were sold “in the passageway between the Millinery and Footwear departments”. By 1937 Adelaide Bankheads chocolates were now on sale in Peter Jones. This particular expansion of the trade was the result of a Partner’s suggestion.

In the meantime the factory itself had moved away from Oxford Street. After a short stay in premises in Barratt Street it settled into a permenant home in Clearings. The varieties of sweets and chocolates which were made there were hand chipped and hand moulded. Special items and assortments could be provided to order and the relatively high prices reflected an extremely high quality product.

The Second World War and it’s consequent rationing and restrictions changed things. Production continued during the war with special reduced allocation of butter and sugar although on a very small scale. In 1948 the Ministry of Food halved the confectioners butter ration and then withdrew it altogether. As a result the Chocolate and Candy Factory was no longer able to make sweets like barley sugar and butterscotch. The handmade chocolates  became too expensive to produce and the CC Factory closed altogether in 1949.