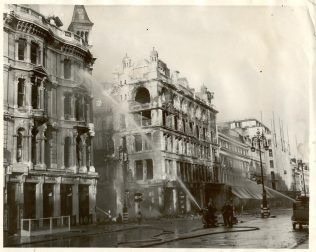 I was 14 when the war started. This was school leaving age at the time, and when children were being evacuated my mother decided to keep me in London.

Education was not considered necessary for girls in those days.

A universal blackout was ordered from 31st August and we were told to keep our identity cards and gas masks with us at all times, but life went on much as usual.

The German army swept through Europe and our troops were evacuated from Dunkirk, leaving behind most of their equipment.

Britain braced itself for invasion but Hitler hoped that we would do the sensible thing and surrender. He first tried to destroy our Air force in the Battle of Britain, then changed to bombing our towns in the hope of demoralising the British People in which he was unsuccessful.

The raids in London started on 3rd September 1940 with nights spent uncomfortably in shelters, usually cramped and uncomfortable.

On the afternoon of the 7th September, my mother and I were in Oxford Street and were outside John Lewis when the air raid siren started wailing up and down.

I still have a sharp memory of hearing a nearby Air Raid Warden blowing repeated sharp blasts on his whistle, which we had been told meant ‘Take Cover’.

At first everyone was paralysed then the doors of John Lewis were opened and we were told to come in and make our way down to the air raid shelter in the basement.

We found everything well organised and with plenty of seating, staff were selling cold drinks and biscuits, also reading matter, but most people felt too unsettled to read.

The raid on that occasion was on the East End and the Docks, so that we could hear no sound of bombing. However we were told not to leave.

We must have been down there for at least two hours and I was starting to get bored when to my surprise, free knitting wool was bought in, together with knitting needles and instructions.  (I think this may have been organised by the Red Cross) We had all been taught to sew , knit and cook at school in those days and were happy to knit for the Forces as in WW1.

I started on a scarf and my mother decided on socks, soon everyone was calming down and chatting.

When we finally came out the ‘All Clear’ was sounding and Oxford Street looked completely normal. If this was an air raid, there was nothing to be frightened of.

Ten days later, on the night of 17th – 18th , Oxford Street was hit repeatedly with high explosive and  fire bombs from Tottenham Court Road to Marble Arch, causing catastrophic damage, 200 staff sheltering in the basement of John Lewis  were unharmed but three firemen lost their lives fighting the blaze.

The only casualty to the staff proved to be the tin of tea money, with all the coins stuck to the base by the intense heat of the fires.

Undefeated, the store continued to trade by post and monthly accounts were sent out as usual.

However the building was beyond repair and was completely rebuilt after the war.

I consider myself very fortunate to have had such a comfortable and well organised introduction to my first daylight raid.

It was to prove to be the beginning of a lifetime of good service for which I would like to thank all the staff of John Lewis and Waitrose.