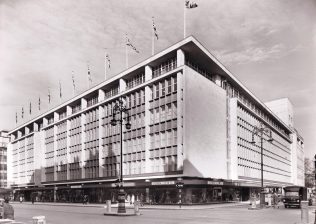 zoom
The exterior of John Lewis on Oxford Street, 1960 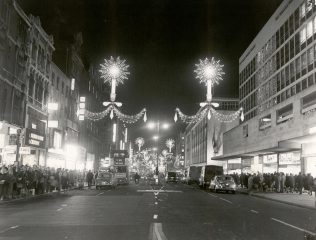 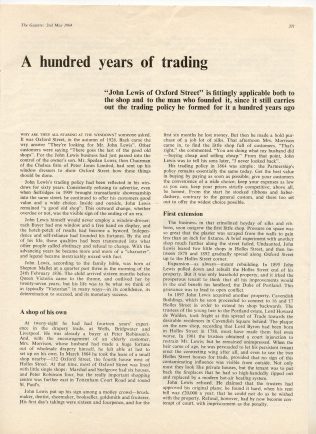 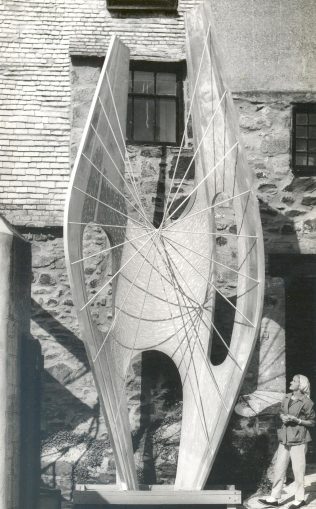 The brand new John Lewis on Oxford Street was opened on the 17th October 1960. The shop then looks much as it does now, although there have been a number of interior changes over the years. Upon opening, trading was conducted from three of the five floors, with the core of the business in linens, furniture, kitchen and tableware, and fashion. However, several entirely new departments were added, whilst several others were expanded. These included radio, television and DIY departments. It was initiatives like this that cemented John Lewis’ position as the flagship store of the Partnership.

The new store also had an auditorium installed with seating for over 300 people. The auditorium was capable of putting on full-scale productions and concerts, and was also utilised as a meeting space.

One new addition that surfaced soon after opening, was the cast aluminium ‘Winged Figure’, added to the exterior of the building in 1963. Originally a competition to design a sculpture for the side of the building had been run, but this proved unsuccessful. As a result, celebrated artist and sculpture Barbara Hepworth was approached by the Partnership. She was asked to design a piece of work which she thought would ‘evoke a sense of freedom’. The resulting work has adjourned the side of John Lewis ever since, and was renovated in 2013 in its 50th year.

John Spedan Lewis, the Founder of the John Lewis Partnership, sadly passed away in 1963. Just one year later, the Partnership celebrated its 50th year of being. It had come a long way since Spedan had been given control of Peter Jones in 1914.

Significantly, 1964 was also John Lewis’ 100th year of trading. The department store had witnessed many ups, and one lengthy, catastrophic down, but by 1964 it had definitely turned a corner. This was the year that the Partnership bonus exceeded £1 million for the first time. In its time since opening, just four meagre years, sales at John Lewis had doubled, and the profits were over four times greater. This set the department store and the Partnership up nicely for the foreseeable future.