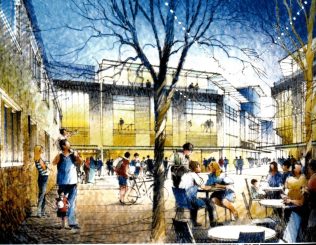 John Lewis Leicester was the first new Partnership department store to open in over 3 years. Opening in September 2008, the store was to be an anchor for a proposed 550,000 square foot extension of The Shires, the city’s existing shopping centre. The proposed Shires West development would turn the area into a retail destination of great significance, and John Lewis Leicester would be at the helm. Once again, the Partnership was spearheading a project that would transform Leicester in its entirety.

The new store was to fill a small hole in the Partnership’s regional coverage. There already existed stores in the North (Nottingham), East (Peterborough), South (Milton Keynes) and West (Solihull), but right in the middle was a small void just waiting to be filled.