The Construction of John Lewis Kingston 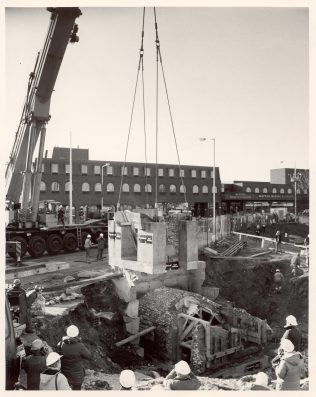 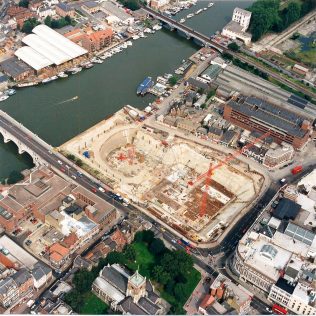 John Lewis Kingston may have been a brand new project, but the site on which it was being built had links going back over 800 years. Preparatory work on the site uncovered part of the old Kingston Bridge, dating back to 1150. A great deal of care was taken to remove such important artefacts, and some items found in the dig can be found in the store today. Once again John Lewis was demonstrating the importance that the Partnership placed on history.

Construction was mostly a very smooth affair. Considering the number of challenges involved in constructing a store in such an urban area, this was no mean feat. The dual carriageway relief road was designed to dissect the site, a feat of modern architecture and engineering. The building itself would feature large sections constructed out of glass, offering plentiful and grand views of the river and bridge. The four selling floors would be built around a large day-lit central space. Lastly and significantly from a Partnership point of view, Waitrose, the supermarket of the John Lewis Partnership would reside in the basement, the first time both main elements of the Partnership had sat habituated the same building. In more respects than one, John Lewis Kingston was breaking boundaries.