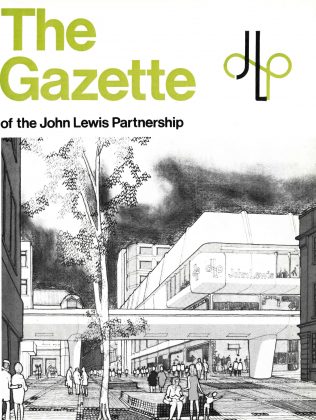 John Lewis Kingston was a product of the Partnership’s long held desire to have a branch in prosperous, populous South West London. Central London had been mastered years ago: both John Lewis Peter Jones and John Lewis Oxford Street had made sure of this. But as of the late 1960s, presence in the South of the capital continued to evade the Partnership. In the early 1970’s, the Partnership expressed interest in building upon the Horsefair site in Kingston. Alas, there were considerable problems that thwarted the buying process. One of the biggest issues was Kingston’s reputation for horrific traffic congestion. At that particular time, the Partnership was not prepared to take such a risk and start building, and talks were put on hold. They would remain this way until 1979.

In the meantime, the Partnership also expressed an interest in building a department store in the London Borough of Sutton, at one end of the High Street. The front cover of the Gazette dated 4th August 1973 proudly donned a sketch of the proposed new branch.