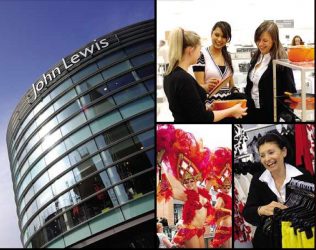 Although a fixture in the Liverpool retail scene for many years as both GH Lee and John Lewis, the new £38 million pound building was certainly a new development for locals.

Several years in the making and built as part of the Liverpool One retail development, customers were now treated to four floors of shopping space with five entrances.

The new branch was also 40% bigger than the previous iteration, making it the third largest in the Partnership when it opened on 29th May 2008. The biggest department in branch is now the catering department who moved from having a 200 seat cafe in the in old branch to a 100 seat espresso bar, as well as a new Place to Eat with a Chef’s Centre, Patisserie and  Creperie, all with views over Liverpool’s historic waterfront.

The ribbon was cut by a group of children from Holy Cross Primary School, the children had previously visited whilst the branch was being built to bury a time capsule there.