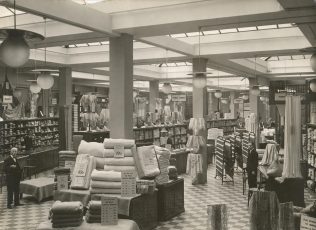 Upon the outbreak of the Second World War, call up to the army caused havoc to the Partnership. As Partners disappeared to war, and rationing took a stranglehold, Jessop’s had to struggle on. But conditions were difficult. A glance at the Jessops budget for 1942 exemplifies the ongoing difficulties. Only £60 was put aside for amenities. In comparison, by 1954, this was figure was £200.

Jessops was another of the Partnership’s stores to be highly lucky during the German bombing campaigns. To begin with, there was a distinct air of complacency regarding safety at work. Many Partners at this time were recorded as frequently heading to work without their gasmasks.

Abruptly however, the face of the war changed when the German bombers breached Britain’s shores. Jessops did not avoid incident. In the years following acquisition into the Partnership in 1933, Jessops had opened a Soft Furnishing Department on the ground floor, and later a Carpet and Hard Furniture Department in the basement. However, in May 1940, the Carpet and Soft Furnishing Factories were gutted by fire caused by an oil bomb dropped at the dead of night. No-one was hurt, but much immediate disruption was caused. Thankfully this was the last action Jessops witnessed in the Blitz. As the war came to an end in 1945, Partners seeped back from service to put Jessops back on its feet again. They were warmly welcomed as the Partnership braced itself for a difficult couple of years of post-war recovery.