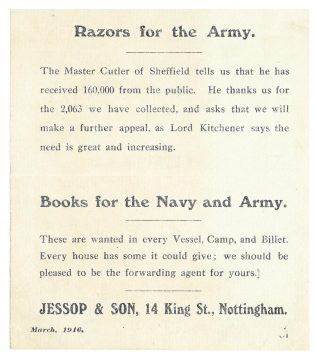 zoom
A Jessops notice to customers regarding World War One

Things changed quickly as the store entered the new century. The death of Zebedee Jessop in 1907 gave William Jessop sole ownership. William was a flamboyant character, who watched over the business with the eye of a hawk. Deemed a fair employer, providing conditions for his workers considered far above average, he knew how he wanted the business to run and didn’t take kindly to outside interruptions!

He frequented local headlines over his refusal to acknowledge the Shops Act 1912, which stated that shops must shut for at least half day each week. He believed this to be an infringement on his rights as an employer, and regularly kept the shop open and simply paying the fines as they came in. This wasn’t the only archaic practise in Jessops. About 80% of the shop’s trade was done on credit; debt collecting was a major part of the job.

It was the First World War that shook everything up. Ready-made clothes were hotly in demand. Motor vans replaced a team of porters, and a typewriter and a lift changed the very nature of shop keeping. Jessops experienced a boom, and expansion was required. As popularity for the shop and its stock grew, the store gradually expanded down King’s Street. In 1920, turnover reached £145,800. That year, William Jessop also died. In the abyss left behind, a succession of managers came and went, and the store entered a period of relative stagnation. The partnership takeover of the store in 1933 provided the stick of dynamite that Jessops needed, and turnover was a putrid £58,598.