Taking steps towards the Victoria Centre 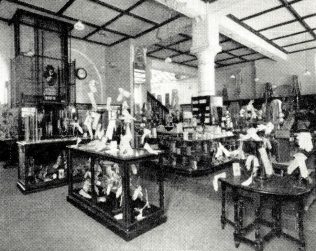 zoom
Jessops interior in the 1920s 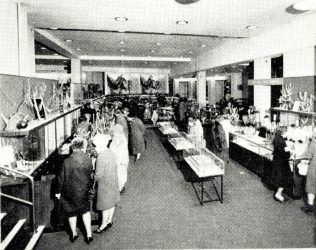 zoom
The same interior in 1963

The initial years after the end of World War Two saw some successes for Jessops, particularly as stock and goods became more readily available. Demand for some stock did dramatically fall. One particular example of this was the second-hand furniture section. Started during the war to great acclaim, demand plummeted in the years following Allied victory, to the point where the entire department was discontinued. What was urgent in wartime was suddenly surplus, and what was absent in wartime was suddenly in high demand.

As goods once again became plentiful, space in the shop was slowly running out. Between the years of 1933 and 1953, sales under the twenty years of the Partnership’s management had multiplied themselves by twelve and a half times! The shop’s impressive return to prosperity had arrived just in time for Jessops Sesquicentenary, 150 years of Jessop and Son.

The late 50’s and early 60’s was a period of expansion for Jessops. Ever increasing popularity was set against the constant need for extra space. For example, in 1960 a proposal was forwarded to add an extra 29,000 additional square feet to the floor space, to be completed in time for Christmas trading in 1962. The finished results went a long way to modernise the interior of the building.