The Grand Opening of John Lewis At Home Ipswich 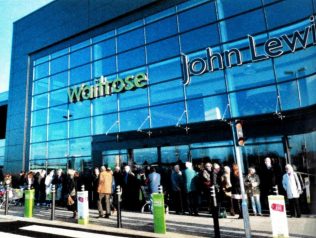 The joint venture of Waitrose and John Lewis At Home Ipswich opened its doors on the 8th November 2012. Trade was roaring from the off, particularly in the cafe that served both stores, with sales from the first three days exceeding previous records set by a whopping 100%! Some customers had been waiting eagerly for a John Lewis to come to Suffolk for over 30 years, evident from the size of the queues that developed well before opening. It was clear from these initial days of trading that having the two divisions together in the same building was an outstanding combination, guaranteed to succeed. Implementation of this strategy on future sites was surely in the pipeline.

John Lewis At Home and Waitrose Ipswich unveiled their latest ‘Team IP’ shared resource: The Progression Zone’ in 2013. It was a learning area for Partners from both branches, aimed at giving Partners the resources and space required to support their own development. In addition, in 2014, John Lewis At Home Ipswich was in receipt of a brand new furnishing department. This is a clear indication of the success that the site in Ipswich has experienced since opening. Although only two years old, the success of John Lewis and Waitrose shared platform will be surely be used for future projects.