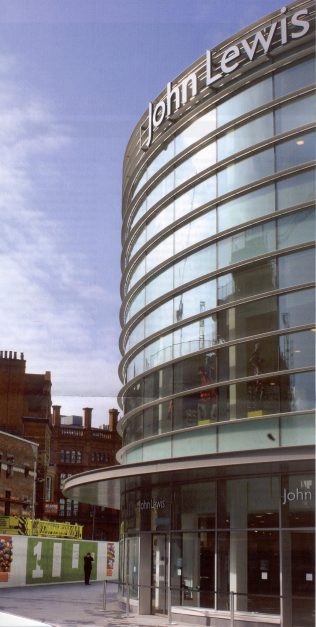 The late 1980’s saw GH Lee benefit from a resurgence of investment into Liverpool. In the 1980’s, Merseyside as a whole had experienced some economic snags, but by the latter end of the decade, things were looking up. Many big companies, such as Pilkington Glass were heavily invested in, bringing large amounts of capital, tourism and employment to the area. The jewel in the crown was undoubtedly the GH Lee department store, which dominated the city’s prime shopping street, and arguably triggered the regeneration of the surrounding area.

GH Lee was undoubtedly a Liverpool institution, but the John Lewis Partnership was, by the early 2000’s, instantly recognisable to a nationwide audience. And so the decision was taken to rebrand the store in 2002. On the 27th May 2002, the city of Liverpool woke up to find John Lewis Liverpool dominating the city centre.

The workload extended far beyond a simple change of name. Further refurbishment was undertaken, and modern design had replaced many of the ageing aspects of the GH Lee decor. Whilst GH Lee had shaped Liverpool’s past, John Lewis Liverpool was determined to sculpture Liverpool’s future. The 27th May opening was indeed a grandiose affair. Never in a mood to turn down a party, corks were popping from 9am, as partners celebrated a new era in style. As this picture demonstrates, a string quartet was even brought in to entertain coffee shop users.

In 2003, the Partnership decided to relocate John Lewis Liverpool in line with the city’s wider redevelopment, the Liverpool ONE project. Construction started in 2005, and by 2008 the new shop in South John Street had been opened. From here it has been trading with a great degree of success ever since