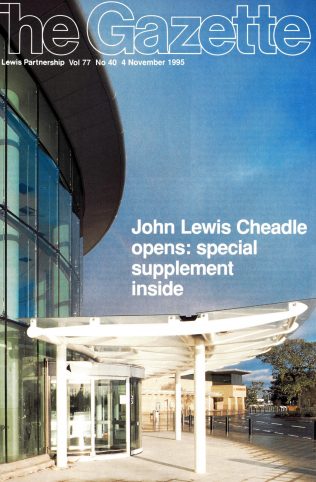 zoom
The Gazette details the opening of John Lewis Cheadle

At 10am, on the 25th October 1995, John Lewis Cheadle warmly welcomed its very first customers. A supplement to the Gazette of 4th November 1995, detailed every aspect of the new store. By 10.10am, the clocks department had already sold a regular clock at £299, followed an hour later by a £550 model. Elsewhere across all departments, the story was the same, as customers welcomed the new store to their hearts. The Place To Eat and the Coffee Shop at Cheadle were doing booming business, fulfilling the needs of hungry and thirsty customers both in the department store an in the link building.

A formula for the future

It was already clear that this new venture would once again sound success for the Partnership. This being so, a multitude of new opportunities had now opened up. Firstly, the option to build further stores in the northwest of England was now a distinct possibility. Secondly, the option to go side-by-side with other retailers, even to the extent where the same entrances were shared, was not only viable but positively pleasing.

The Partnership in the past had largely rejected the role of advertising. Instead efforts were intensely focused on maintaining the Partnership’s steadfast reputation for choice, value and exemplary customer service. But with no history in the area, Cheadle presented a unique challenge. An advertising campaign would raise awareness of the new shop and could differentiate the shop from surrounding competition. The campaign principally took the form of posters. The contents of the poster centred on what made the Partnership truly unique, the fact that the business is owned by all of its Partners. The theme of co-ownership is summed up aptly summed up by the advert above.