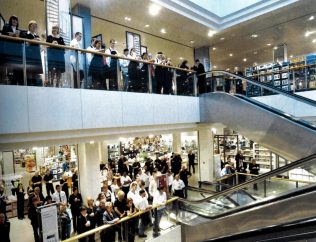 zoom
Partners congregate for the relaunch of their store, following the completition of Project Crystal 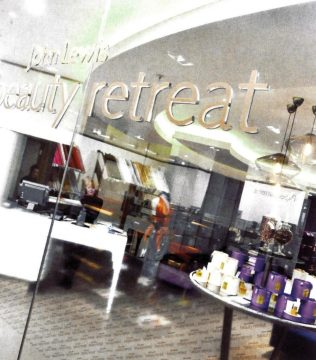 zoom
The beauty retreat at John Lewis Cheadle: one of two brand new concepts at the branch

In 2004, it was confirmed that Cheadle would be part of a project absolutely unique within the Partnership. For Cheadle was to be linked with a brand new John Lewis store, ‘John Lewis Trafford’, to be opened in the existing Trafford Centre in Manchester. Cheadle would share a service building and a call centre with the brand new branch, in order to maximise selling space in Trafford. The result was a complete reshuffle for the Stanley Green Service Centre, set to serve both stores from 2005.

‘John Lewis Cheadle’ had been built to last, intended to be at the edge of modern retailing. As a result, refurbishment was not instigated at any time until 2011, when a £17.5 million makeover was proposed. At this point, the store was now over 15 years old, and certain elements needed updating. ‘Project Crystal got underway soon afterwards.

By October 2011, the makeover, ‘Project Crystal’ was complete. Whole departments had been moved, then moved again, but it was two entirely new concepts that were catching customer’s eyes. The first was a waitress-service restaurant called The Kitchen, the second was the very first Beauty Retreat in the Partnership. This extensive refurbishment has carried the store through to where it is today, and has set it up excellently for the future.