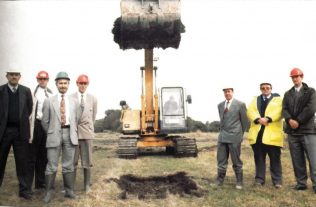 zoom
A digger takes the first chunk out of the ground, marking the commencement of the construction of John Lewis Cheadle

zoom
One year on, and construction is nearly complete

By 1993, planning permission had been accepted. On Tuesday 5th October, the Partnership’s contractors moved in, and started on the foundations. The two stores, Sainbury’s and John Lewis would be joined by a link building, which would house the entrances of both stores.

John Lewis Cheadle was set to carry the full range of merchandise over three floors, and was modelled on other recent new builds, such as John Lewis Wycombe. Throughout 1994 and early 1995, the department store began to take shape, as construction was carried out at a rate of knots. The photo’s below show some of the stages of construction. Throughout the summer of 1995, parts of the store were handed over to the Partnership as they were completed, in order for internal fitting to take place. The target opening date of 25th October 1995 was looking well within reach.