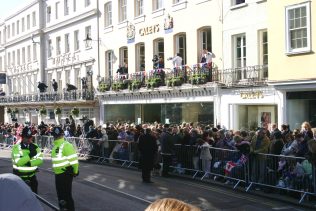 zoom
Royal to the end; Crowds gather in front of Caleys during the Royal wedding between Charlies and Camila in 2005

Despite the promising start made in the new decade, sales figures for the store began to drop rapidly. As bigger, better placed stores opened up whilst others were renovated, Caley’s began to suffer from its own excessive quirkiness. A move in 2003 to co-ordinate the branch with John Lewis Reading had faltered. In the end it was the success of Caley’s larger neighbours that proved to be the final nail in the coffin. Reasons to keep the store open evaporated as losses were recorded in 2005 and predicted for the years following. The Partnership was left with few alternatives.

And so it was that after a very happy 66 years in the Partnership, Caleys of Windsor closed its doors to the public on the 16th July 2006. As it did so, the branch waved goodbye to a number of its treasured colleagues, loyal customers and royal customers. There was certainly more than one tear shed that day.