Memories of Caleys: Caleys at Cliveden, 1960. 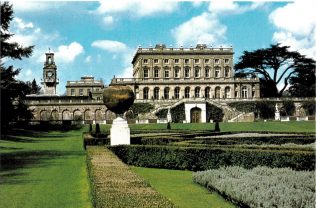 At the age of 16 I began at Caleys, High Street,Windsor on 7th September 1959 straight from school with just 4 ‘O’ levels and as a Junior Sales worked in the Ladies separates department on the second floor.  My pay was £4 per week.  (I had worked in the school holidays at The Odney Club for the previous 2 years living as I did at The Grove with my Mother who also worked for the Partnership)

Although my Caleys pay increased to £5 per week in July 1960 I was so thrilled to receive a Good Work Bonus of 21/-d. (one quinea!) the following month for helping at Cliveden. (now a National Trust Property near Maidenhead)

In early August 1960 Caleys had been invited to put on a Fashion Show in Aid of The Red Cross at the then home of Lord and Lady Astor.

General Manager Mrs Marietta Day needed 2 Junior Sales girls to help the London Mannequins with their changes of clothes and I quickly volunteered.

The raised catwalk was carpeted in red and stretched the length of the terrace with access by the models from the Library at the east side of the house where their changes took place and where I was posted.

It was a dry, warm although an overcast day but oh so memorable.

Lord Astor remained in the Library though out, wandering around with a silver salver (and I thought getting in the way…) offering those taking part, mainly the models, full glasses of champagne. Those of us from Caleys of course abstained!

The Fashion Show was very successful and the name of Caleys of Windsor was well publicised although so many of our regular Lady Account customers were there at Cliveden proudly attending the event.

However it came as a great shock to everyone when news broke not long afterwards  of the scandal ‘The Profumo Affair’ centred around Cliveden which brought down the British Government a couple of years later.