Maria Caley and the blurred beginnings of Caleys 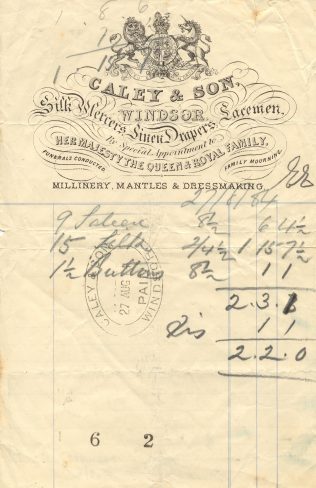 zoom
A headed bill from 1884 shows some sort of staff discount, possibly for staff

The early history of Caleys of Windsor is slightly ambiguous, and open to interpretation. No-one knows the exact year in which trading commenced, and some theorise that a Caleys in Windsor can be traced back to the years of the French Revolution. The first material evidence of Caleys in a trading and capacity is an advertisement from October 1813, placed in the newly founded Windsor and Eton Express. The advert stated;

M. Caley. Milliner, Dress-Maker and Haberdasher, later of Thames St, Windsor, begs leave to inform the Ladies of Windsor, Eton and their Environs, that the above business will in future be carried on in Castle-Street, in conjunction with her sister, Mrs Noke. M. C takes this opportunity of returning the most grateful thanks for the numerous and distinguished Favors hitherto so liberally conferred: and (jointly with her sister) most respectfully solicits a Continuance of the same.

Goods fit for a Queen

From the above it can be identified that a move from Thames Street to Castle Street took place, possibly instigated by one Maria Caley. It is highly possible that such a move occurred to further the business, for it is known that Thames Street was not a good location. Despite this, the town was beginning to prosper under the watchful eye of Windsor Castle, the future Royal residence of Queen Victoria and Prince Albert. In these early years, Miss Maria Caley continued her advertising campaign, every spring and autumn she would advertise her new stock.

In 1820, she achieved the accolade of a Royal Warrant, after providing goods for Queen Charlotte, wife of George III. Henceforth, she traded as ‘Milliner to her Majesty and T.R.H the Princesses and the Duchess of Gloucester’. Despite the Warrant setting it apart from other businesses, Caley was clearly mindful of her growing number of competitors. After 11 years on Market Street, the business moved to Windsor High Street, where it would remain until closing in 2006.