War and peace, rise and decline 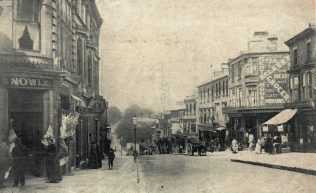 Buckleys was the happy receiver of roaring trade throughout the war years. Harrogate had a unique captive audience: the hundreds of evacuees, billetees and Civil Servants that made the town their home. Many of those transferred away from the dangers of the city life were rather thrilled to learn that the John Lewis Partnership resided not just in London. They could purchase quality goods from Buckleys. An RAF base close to the store ensured that the restaurant was always packed, and together these two aspects powered the shop through the War. In fact, once war ended, and those displaced trickled back to the cities, custom nosedived and the shop went into decline.

Attempts were made in the years after the war to alter Buckleys fortunes. Some departments were closed in order to make space for those deemed more successful. Surviving departments were dutifully renovated, and the restaurant was given a new lick of paint. On the whole, this made little impact. Despite satisfactory local trade, there was simply not the space to properly implement Partnership policy and management; definite limitations to any future success. The shop itself was also too distant to run under central control. When the Partnership received an offer for the business of Buckley and Co in May 1953, they needed little persuasion to accept. The final day of trading was to be Saturday 12th July and Buckleys of Harrogate closed its doors for the last time.