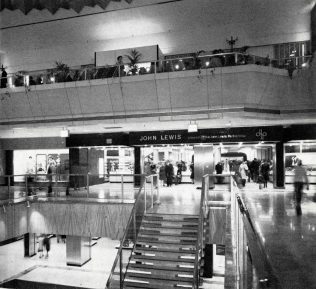 zoom
The front entrance to John Lewis Brent Cross, on year after opening 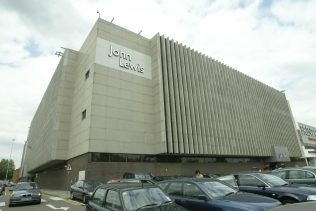 It was immediately obvious that Brent Cross Shopping Centre, along with the John Lewis and ‘Waitrose had proven instantly successful with the locals. On its first birthday, the centre reflected on a hectic year. In the run up to Christmas, the building had experienced a quarter of a million visitors a week, and on an average Saturday, more than 50,000 people crowded through the doors!

In 1995, a £40 million pound refurbishment was motioned for the Brent Cross Shopping Centre. The mall was to be entirely redesigned in order to improve customer flow, a result of the centre’s unprecedented popularity. An entirely new mall was to be created, 8 new elevators and two new glass lifts were instigated to alleviate congestion.

John Lewis Brent Cross and Waitrose Brent Cross embraced the refurbishments whole-heartedly. The department store added a brand new The Place To Eat restaurant, replacing the wine bar. Waitrose was the lucky owner of a brand spanking new expansion. Both the shopping centre and the two shops were now ready to face the twenty-first century.

A year and a bit after the turn of the century, Brent Cross Shopping Centre celebrated its 25th year of trading. John Lewis was no doubt a considerable cog in the wheel of ongoing success. Of the 1300 partners working at the department store, over 30 founder members still remained. On Sunday 15th July 2001, John Lewis Brent Cross became the first branch to open seven days a week, becoming pioneers of Sunday trading. The move was a clear indication of the store’s continuing popularity.

At this point, the shopping centre in general was becoming increasingly well known for its fashion. In order to compete with its retail competitors, John Lewis Brent Cross confirmed a £5 million refurbishment project with a focus on the fashion department, store lighting and store ceilings. These were the first works to be undertaken since the branch opened in 1976, and were completed by October 2002. In 2006, the second wave of such works was confirmed. Project Pearl aimed to raise Brent Cross standard to the highest brinks of modernity. By October 2006, these latest refurbishments were completed.