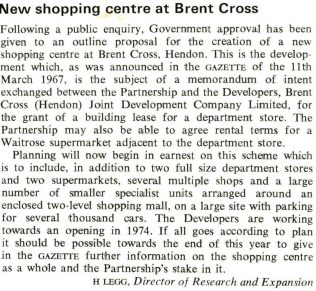 zoom
The announcement in the Gazette regarding the proposed building of Brent Cross shopping centre, which would feature a full line John Lewis
My location
Get Directions

The first whisperings of about a proposed department store in North West London, to be built at Brent Cross, appear in the Gazette dated 11th March 1967. A public enquiry began on the 3rd December 1968. The Partnership’s Director of Research and Expansion, Mr G C Walton was called upon to give evidence. A positive outcome would enable the Partnership to seek planning permission to build on the aforementioned site. However, there was no word on the decision throughout the whole of 1969. In May 1970, it was announced that Government approval to build the shopping centre had been approved. Now it was just the small matter of the approval of planning permission.

On the 6th January 1973, the Gazette announced that planning permission had finally been granted. Construction on the country’s first regional shopping centre could now begin. With excellent links to the M1 and the A41, the Brent Cross branch of the Partnership would be in an outstanding location with a wide reaching catchment area. John Lewis Brent Cross was one of the anchor shops inside a 600 foot long central mall.