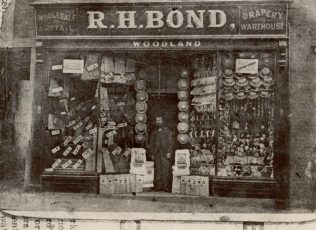 zoom
A photograph of the shop from the 1880's. The man at the entrance is likely to be Mr R.H Bond

The business was founded in 1879 by Robert Herne Bond. Having outgrown the family business started in Chelmsford by his brother, Robert Bond decided to try his hand in Norwich. He purchased a small drapery shop at 19 Bar Street. He then had two sons, William and John, and they were soon after joined by a third, Ernest. All three would have important parts to play in the narrative of Bonds.

Although largely unrecorded, Robert Bond obviously experienced substantial success with his original drapery store. For by 1895, he began to expand. He acquired adjacent properties along Ber Street, and on the corner of All Saints Green. In 1897, William Bond joined his father in the business. In 1903, Ernest Bond also joined. Although John, the third son never joined the business, he became a successful architect, and would go on to carry out all extensions on the shop right until the Second World War.

If you have any photographs of the Bond family, we would love to see them!