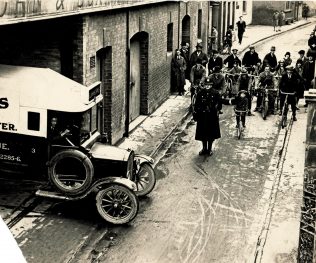 For the next five years, both shop experienced a fluctuation of high and low points. Although the Gloucester shop continued to trade well, in 1952 the front of the shop collapsed. According to the Gazette of the 14th June 1952;

All such world-wide troubles were eclipsed by the startling collapse of our shop front on the never-to-be-forgotten on Friday morning, the 28th September.

Frankly, this was a physical embodiment of Blinkhorns post-war fortunes. Accordingly, Stroud continued to struggle. The shop itself was far too small for Partnership requirements, and the town of Stroud, made up of only 15,000 people was arguably too small to warrant Partnership participation. In reality, Gloucestershire was too remote for the Partnership, and too far away to be organised from a central location.

It can hardly be considered surprising therefore that the sale of Blinkhorn’s, both Gloucester and Stroud, to F.W Woolworth and Co Ltd was completed in September 1953. The last day of trading in both branches was the 19th September. Just as quietly as it had arrived in Gloucestershire, the Partnership vanished.