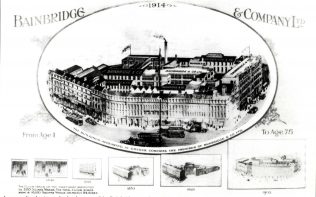 A new century brought the utilisation of brand new technology, as a way of differentiating themselves from competition and guaranteeing custom. The installation of telephones enabled customers to ring in with orders, and shop assistants were often required to visit customers at home with a portable selection of merchandise. A Panhard Lavassor motor delivery van came into service in 1902, and was soon turned into a small fleet. Amongst other feats of mechanisation, the first house journal, the ‘Albert House Magazine’ was published, and hundreds of customers were kept informed via annual blotters and diaries.

The new technology allowed the shop to cope with ever growing popularity, but despite this, efforts were still very much concentrated on providing traditional department store merchandise. There was a new-fangled trade in work clothes, providing the likes of moleskin trousers. Other odd services were available, such as the store’s very own fire brigade. Elsewhere, local drapery shops for miles around obtained stocks from the wholesale section. In 1923, a new line of trade was ventured into, a food hall was opened for customers, offering tea and coffee, as well as top qualities meats!

In 1929, a men’s hairdressing department was opened. The Bainbridge site was now in the shape of a very large triangle. The main frontage was still located on Market Street, but the shop stretched back with two smaller entrances on Grainger Street and Bigg Market. Just before the outbreak of the Second World War, Bainbridge & Co celebrated its 100th year of business. And it did so in style, the words A Century of Service were erected on the Market Street Frontage.