The end of the 19th century 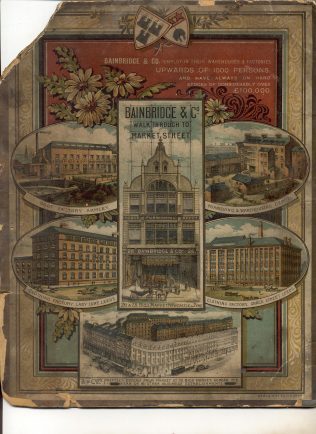 zoom
A Bainbridges blotter cover from 1891 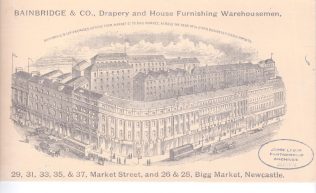 zoom
The Bainbridges exterior by 1890

Vast increase in size and scale

At the end of 1850, Muschamp left the business, leaving the Bainbridge in sole control. As success kept coming, the shop premises grew as did the number of employees. From an original number of ten staff, by 1899 there were 700 in Newcastle, and a further 800 at a factory based in Leeds. In 1838, there had been 200 yards of floor space, by 1899, the aggregate length of the showrooms was more than a mile long. Growth in the latter part of the 19th century was immense. A variety of properties were taken over that became extensions of the shop. In 1876, the whole shop was rebuilt over four storeys, and by 1880, sales from retail and wholesale reached nearly £253,000. With demand and profits steepening, a factory was acquired in Leeds.

On top of the men’s and boy’s clothing factory in Leeds, six years later in 1886, a factory was opened manufacturing hat and caps. Later a boot and shoe factory was opened, finally joined by factories for women’s clothing, knitted stockings and mattresses. By 1899, there were 800 members of staff in Leeds.

Life for staff in Newcastle

Many of the shop assistants lived in a hostel near the shop, Albert House, named after the original property at 12 Market Street. There were strict rules in place, and infringements of these were punishable by fine. Working hours would have been long, around 8am-9pm a day. An annual wage was around £30.

But, Bainbridge staff had it better than most. The hostel was very well furnished, and there were a number of social events, sports teams and societies that workers could join. The first issue of the Albert House magazine from 1910, gives reference to ‘times past’, including a 1903 walking contest that featured 70 competitors, just a small indication of an active campaign to provide worker benefits.

The most prominent society within the hostel was the Albert House Benevolent Society, founded in 1870 by Cuthbert, one of Emerson’s sons in the business. The aim was to help former and present staff who had fallen upon hard times. The society was funded by voluntary subscriptions from assistants, which were matched pound-for-pound by the company.

End of the century

Emerson Bainbridge died in 1892. Control of the business passed to his sons. Initially it was controlled by Thomas Hudson Bainbridge, but it later changed hands again, this time taken on by George Bargate Bainbridge. The latter joined the company in 1867 as a boy, and would remain involved as chairman of the company nearly 80 years later. In 1897, just prior to the end of the century, the business was turned into a private limited company.