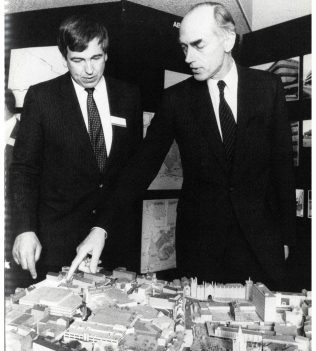 Upon its opening at the beginning of October 1989, John Lewis Aberdeen became the Partnership’s most northerly store trumping the Edinburgh branch of its previously held crown. Opening a store in Aberdeen was a symbolic gesture. It might have been 543 miles from London, but it was proof that nothing was off limits.

The Partnership entered Scotland for the first time in 1943, when it purchased the Silk Shop in Edinburgh. John Lewis Edinburgh, as it would become, quickly prospered, becoming one of the most profitable stores in the Partnership. The gamble with Scotland had clearly paid off, and those in charge were eager to repeat the feat in one or both of Scotland’s other principal towns, Glasgow or Aberdeen.

In the mid 80’s, an opportunity arose in Aberdeen that gave the Partnership the opportunity they had been craving. An important piece of shopping area in Aberdeen city centre was about to be developed. A pre-existing local department store located in a prime position was the target for the new branch, although much redevelopment was planned to effectively double the shop in size. The store would benefit from being opposite Aberdeen’s covered shopping centre and within a stone’s throw of the bus station.